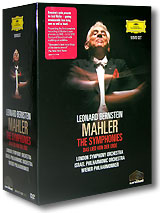 Описание:Gustav Mahler. Symphonies Nos. 1, 2, & 3Beginning with the First Symphony, Bernstein reveals Mahler's position at the hinge of modernism, while emphasizing his emotional extremism. The uplifting Second "Resurrection" Symphony, with which Bernstein had an especially long and close association, is recorded here in a historic performance from 1973, set in the Romanesque splendour of Ely Cathedral. In the Third, Bernstein encompasses the symphony's spiritual panorama like no other conductor - with the Vienna Philharmonic players alive to every nuance. Gustav Mahler. Symphonies Nos. 4, 5 & 6Bernstein's youthful, urgent conducting of the Fourth takes a refreshing slant on the symphony's classical temper, while in the Fifth he coaxes from the Vienna Philharmonic a detailed response to the work's tragic beginning and triumphant conclusion. The reverie of the Adagietto is uniquely intense in this performance. Bernstein's thrilling traversal of the epic Sixth Symphony comes from the end of his Mahler cycle in Vienna, during which the conductor and his orchestra forged an unbreakable bond. Gustav Mahler. Symphonies Nos. 7 & 8Leonard Bernstein, whose performances of the Seventh were instrumental in pushing the work towards mainstream status, conducts it here with white-hot communicative power. When he prepared the huge "Symphony of a Thousand" with trie Vienna Philharmonic for the 1975 Salzburg Festival there had been only one previous Austrian performance. This DVD encompasses trie exultancy of the opening movement, while in the second movement, Mahler's setting of the final scene from Goethe's Faust, Bernstein drives the music to the final redemptive blaze of glory. Gustav Mahler. Symphonies Nos. 9 & 10Filmed on tour at Berlin's Philharmonie, this account of the valedictory Ninth Symphony is an intense interpretation, expressing Bernstein's conviction that modern man had at last caught up with the message encoded in Mahler's last completed work. Having made his famous 1966 studio recording of Das Lied von der Erde in Vienna, Bernstein re-recorded this in Israel with the same searing subjectivity- Rene Kollo draws on the voice of a great Wagner tenor, while Christa Ludwig, the greatest exponent of the contralto songs at the time, is unbearably poignant in the final movement's fusion of elation and sadness. Gustav Mahler. RehearsalsLeonard Bernstein's greatness as a conductor lay partly in his unique power of infusing new life into the works he performed. He often said that a successful concert was one in which he felt himself to be composing the music, too. Expecting maximum effort from his musicians, he was also unsparing of himself in getting the results tie wanted. Fortunately the teacher in him means that we have, in these three overlapping programmes, the extensive rehearsal and documentary footage to demonstrate what was involved, as we see and hear him working on Mahler with two of his favourite orchestras, the Vienna Philharmonic and the Israel Philharmonic.